You can't wear that 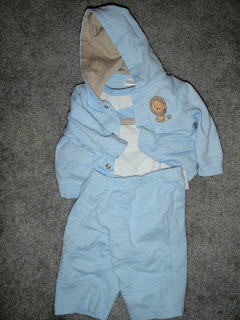 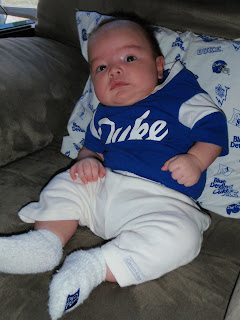 Yesterday was the UNC vs. Duke game but it was also Isaac's first day at church. So I put him in this cute outfit and when David saw it he told Isaac he couldn't leave the house looking like that (because light blue is UNC's colors).
Yesterday was also his first trip to Costco and Trader's Point Creamery. He did great at lunch (TPC) but wasn't that good at Costco. I think it was our shortest Costco trip ever.
Saturday was Isaac's first trip to Babies'R'Us and he went to a movie with us. I had extreme anxiety at the movie and was watching Isaac instead of the movie because I didn't want him to scream. David was great and took him out when he was going to. Coraline 3-D was an awesome movie.
He also slept from 8pm to 3am last night, that's 7 hours! I hope it continues.
Posted by Unknown at 1:28 PM