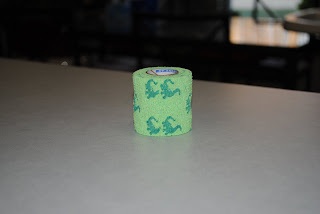 Isaac is weighing in at 28lbs 3oz, 93%; height 34 3/8in, 99.8%; head 18 3/8in, 44%. He's a big healthy boy that goes through 3 gallons of milk a week. Because of the amount of milk he drinks the doctor wanted to get a blood draw to check his blood sugar and for anemia. Also since he eats everything he finds on the floor and outside we are getting his lead levels tested too. We've already gotten the results from the blood sugar and anemia, which were normal. We have to cut the amount of milk he drinks to half of what he currently drinks. This should be easy since he loves water.
At our hour long appointment Isaac spit up all over me, which left me smelling like rotten milk. The appointment itself went well and the doctor was impressed with how healthy he has stayed. Nurse Pam then gave Isaac 3 shots, which went as well as expected just a little crying.
Next we went the lab to get his blood drawn. This did not go well. After waiting an hour they attempted to do a draw and stuck him 3 times!!! I was crying when we left and they told me we could come back next week or go to the hospital. I opted for the hospital because I did not want that lady touching my son again. With it being an hour past his nap we headed home to rest and went to the hospital after lunch, which he didn't eat due to his new teeth. The hospital nurses were soooo much better with Isaac and me. They even let him keep the roll of dinosaur tape.