I've been up since 4am and aren't as fast to react as I usually am. So Isaac got a little lesson on the life cycle today. I open the back door to let the dogs out then went to do something in the living room and when I looked out the back window I saw that the dogs were fighting with something. I go to see what's going on and Daisy is shaking something very large around and it is squeaking! Then I start yelling at Daisy and Isaac comes outside to see what's going on. I then call David and he thinks its cool that Daisy caught a squirrel and wants me to take a picture. That didn't really help with my problem of getting Daisy away from the squirrel. He did suggest getting dog treats, which worked. I then have everyone inside and am going to get a trash bag to pick up the squirrel and Isaac opens the back door because he's very curious about what's out there, and the dogs are off to the squirrel again. I give up and let Isaac look at it while the dogs sniff it. Isaac was very interested in looking at it then he became concerned when I put it in the trash can. I explained that Daisy broke the squirrel and now it has to go in the trash. j
After that episode we go to play in the front yard and every time Isaac walks past the trash can he points to it and says broken. I'm not sure if he is concerned about the squirrel or just informing me. He then proceeded to pick up all the dried up worms and bring them to me. I guess the theme for the day is life cycle/death. He did start out the morning by smushing ants with his toes. Ahhh the life of boys. 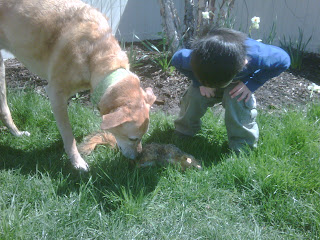