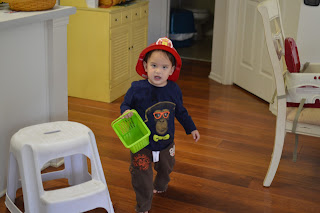 Weight 27 lbs 8 oz.; 88%
Length 34 in.; 93.3%
Head 18.75 in; 68.33%
He's a big boy, but not as big as Isaac was.
He should be saying 20-50 words, but he's only saying a few and signing a few.
He should walk well, which he is doing pretty well.
He should help with dressing and undressing, which he does. He loves wearing his shoes and throws a fit when we take them off.
He should point to body parts when asked. Not doing this but thoroughly enjoys poking our eyes, and sticking his fingers up our noses.
He should use a spoon and fork. Check!

Overall he's doing well. I mentioned to the doctor that his foot still turns in when he wears his orthotics. So the doctor put his foot in the neutral position and his knee is then pushed around to the outside of his leg. Now we have a referral for an orthopedic specialist.
I was supposed to have him off the bottle by now, but he's my baby and that's his comfort item. So I haven't pushed it. The doctor wants me to get rid of all the bottles, so now we are in a battle with sippy cups and constipation. Nolan still wakes up one time in the night and I give him a bottle. Doctor also wants me to stop this, but I'm not doing this one. Nolan will be waking the entire house if I don't go in there with a bottle.
We have definitely started the terrible twos. Nolan started biting me last week in an effort to show me he didn't like the situation.