Plane rides with a 1.5 year old

It was a little over 2 hours to Houston then another 2 hour flight to Ixtapa. Isaac was pretty good on the first plane ride since we had seat right in the front we had a lot of leg room for him to play on the floor. Then he slept the entire way from Houston to Ixtapa and that flight was FULL of kids. The flight attendant said he thought this flight was going to Disney just based on the number of kids.
We weren't so lucky on the way back. Isaac screamed on the way up and the way down on both flights back, I'm pretty sure it had to do with his ears. Well, about 20 minutes into the first flight he threw-up in his carseat, thankfully only a little splatter on me and I had a change of clothes. After waking David to help me clean up I then passed Isaac off today and tried my best to unwind from that episode. As we were pulling into the gate in Houston, Isaac fell asleep. Sleeping through customs and waking up when we got the car rental shuttle. The next plane right was a few days later and it was almost as horrible. After leaving the hotel we stopped for some food before going to the airport and before we even left the restaurant's parking lot Isaac threw-up in his carseat. My wonderful husband cleaned the carseat the best he could in the Texas heat while I tried to clean up Isaac in the restaurant's bathroom. We thought it would be best if he just traveled in a diaper for the remainder of the trip. He was very hard to keep entertained on the flight back to Indy and David now wants to invest in a portable DVD player. 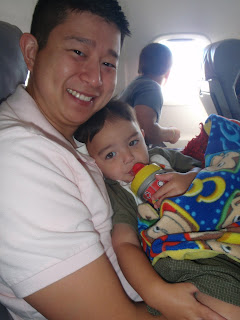 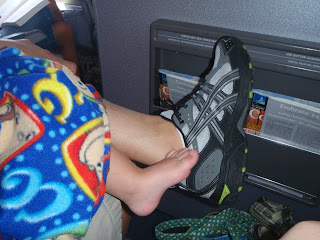